What is El Gordo?

El Gordo is a popular Spanish Christmas lottery that began more than 200 years ago in 1812. Several smaller lotteries in the El Gordo lottery are played weekly, but the most popular one is the Fat One of Christmas, held annually on 22nd December. It is the longest lottery, with ticket sales starting in July. Thousands of people worldwide purchase the tickets hoping to win in the draw. The lottery also has the world record for the highest total of prizes, which stands at $2.7 billion.

How can you play El Gordo? 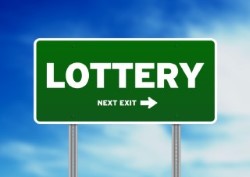 To play El Gordo, you must purchase a ticket online or from a lottery store in Spain. If you do not live in Spain, then you can easily buy the ticket online here at Simbalotto. Our website offers the sale of tickets for the El Gordo lottery

How many games can you play in the El Gordo Lottery?

The weekly lottery is played every Sunday for a jackpot of $4 million. This game began in 1993, and today, approximately $31 million has been won in cash prizes. You can play the game on our website by choosing five numbers from a line of 1-54 and one other number from a line of 0-9. The winner of the draw is announced every Sunday and awarded the jackpot.

4 lotteries giving you good chances to win millions
€1 million is enough for you? These 4 lotteries offer better chances …

Other games include the Spanish 6/49 (La Primitiva), played every Monday, Thursday, and Saturday for a jackpot of $2.4 million, the Euromillions, played on Tuesdays and Thursdays, and ElNino, played every 6th of January.

To play the Spanish 6/49, you select six numbers from a line of 1-49 and another number from a line of 0-9. Your goal in the game is to get the 6+R combination. Play the Spanish 6/49 on our website for a chance to win the jackpot of $2.4 million. We have analyzed the game since its inception in 1985, offering you a higher chance of winning. Today, approximately $66 million has been won in cash prizes.

As for Euromillions, you play by selecting five numbers from a line of 1-50 and two more numbers from a line of 1-12. The player who gets 5+2 hits is announced as the jackpot winner. Don’t worry if you and your friend get the hits correct, as the prize will be divided equally between you. Play the game on our website for a higher chance of winning, as we have analyzed the game since it began in 2004.

El Nino is a special draw of the National Spanish Lottery played on 6th January. The game began in 1763 and offers prizes up to $699 million. To play the game, you purchase tickets with numbers between 00.000 and 99.999. The game is similar to the Fat One of Christmas as it offers tickets in the form of “decimos.” The numbers on the tickets can be divided into 45 blocks, with each block having “decimos”; ten tickets. Thus, if you want to play a full number, you must buy 450 “decimos.” This offers you a higher chance of winning bigger prizes in the draw.

The mega-lottery most of our customer prefer
The Mega Millions lottery is one of the world’s biggest and most popular.

The most popular El Gordo lottery is the Fat One of Christmas, played annually. The game is played by millions of people in Spain and worldwide to celebrate the Christmas season. According to the Spanish tradition, the tickets and the prizes are to be shared among family and friends, as there are numerous prizes to be won, thus increasing the chances of winning.

How do l win El Gordo?

To win the 1st prize in the Spanish Christmas Lottery, your ticket numbers need to align with the winning ticket number. You can purchase this ticket on our website and choose five numbers between 00000 and 99999.

To win the other prizes, you must have similar numbers to the number on the winning ticket. The winning numbers will be announced on 22nd December in Spain in an event that takes about four hours.

What is the lottery prize for the games?

Minor games like the Sunday 5/54 + 1 have smaller prizes to be won; thus, their ticket price is lower. On the other hand, you can get up to $194 million when you play significant games like the National Lottery and Euromillions. The biggest game in the lottery is the Fat One of Christmas, also called El Gordo. You can play this game on our website in the comfort of your home and stand a chance to win a share out of $2.7 billion.

Can you play El Gordo online?

Yes, you can play El Gordo online from anywhere in the world. Your location should not hinder you from playing the games as there are many prizes to be won. You simply need a ticket from us.

Once you have registered an account on our website, you will need to deposit some funds into the account. The money will be used to purchase your ticket, which will be available after a few hours.

Selecting the ticket is essential to any lottery game, as each game has its rules. For games such as Euromillions, you play by choosing a ticket with five to six numbers ranging from 1 to 50. To play El Gordo, the Fat One of Christmas, you can purchase a full lottery ticket or a “decimo” with five digits. A full ticket is quiote expensive, but you can buy a “decimo” at a lower price. A “decimo” is a tenth of the ticket sold to ten group members.

Are there smaller divisions of the full lottery ticket in El Gordo? 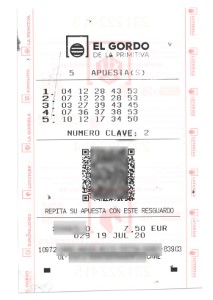 There are other smaller divisions of the full lottery ticket. As mentioned above, there is the “decimo”, a tenth of a ticket which will go for a tenth of the price of the full ticket. There is also “participaciones” which are smaller parts of a decimo. The “participaciones” usually have numbers that previously won the lottery and are sold by bars, companies, and charities to people in Spain.

If acquiring the tickets on the internet, you can create your own prediction by conducting research on numbers that previously won. Our site also offers “decimos” and smaller divisions according to your preference.

To create your account at Simbalotto, you must fill out a form with personal data such as your name and email address. Our website also accepts payments via Bitcoin and instant bank transfers. Once you have filled out all the fields, you can proceed to purchase the ticket. You are now a registered user!

How long do l wait for the draws?

For weekly games such as Spanish 6/49 (Primitiva), the Sunday 5/54 + 1, and Euromillions, the draws are announced on specific days each week. You can select a day to check the draw when purchasing the ticket. These games are easy to play and easy to win.

Playing major games such as El Gordo is a bit more complicated. First, El Gordo is played annually thus you may have to wait for the draw for a couple of months. Second, unlike the other games, you purchase a pre-printed ticket with five numbers of choice rather than randomly picking the numbers to be on the ticket.

The draw is announced by children in an event broadcast nationally and on the internet on 22nd December. The children pick up the winning ball from a large cage with 100,000 wooden balls. The children read out the five numbers on the ball and the tickets with any of the numbers receive a prize.

Playing El Gordo on our site guarantees a one-in-six chance of winning the prizes.

What are the advantages of playing El Gordo online?

Playing El Gordo online has numerous advantages. First, it gives you the opportunity to explore lotteries from other countries as they might have greater odds of winning and bigger prizes. El Gordo currently holds the highest winning prize total at $2.7 billion. There are also numerous smaller prizes to be won and a one-in-six chance of winning if you play.

It also saves time as you will not need to walk to a lottery store to purchase a ticket. Our website is easy to navigate. The tickets purchased will be available in your account in a few hours.

You need not fear a breach of information as the data on our website is encrypted, protecting it from malicious hackers.
Playing El Gordo online will allow you to enjoy something new while learning new skills and loopholes in the lottery games.

Are there taxes on the prize money?

Cash prizes below 2500 euros are not taxed. Only prizes above 2500 euros will be taxed by the lottery. This is in accordance with legislation that the Spanish government passed in 2013. The Spanish government gets 30% of all the sales of the tickets sold during the lottery while 70% is awarded to the winners in cash prizes. Consequently, a 20% tax fee is applied for all prizes above 2500 euros.

How can l get paid if l win?

You do not have to travel to Spain to receive your prize money. Prize money up to 2500 Euros will be deposited into your Simbalotto account, and you can withdraw it whenever you wish. If your cash prize is higher than 2500 Euros, our support team will contact you and you will have to fill out a claim form. All this can be done online. After you sent the documents, we will forward your cash prize claim to the lottery that you played in and you will receive the payment directly from the lottery commission of the lottery.